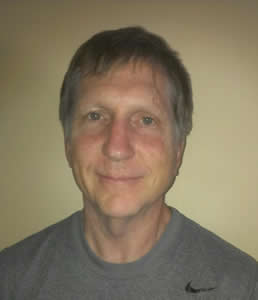 My name is John Hofman III. My wife and I have four sons and a bunch of grandkids.  The United States Air Force (USAF) brought us to Albuquerque after having living in New Mexico, North Carolina, Texas and California as well as the Philippines, Korea and England.

As a member of the USAF for 26 years I maintained an active life style.  I was a recreational runner having completed several marathons including the Duke City Marathon and many shorter races.

I was also a recreational cyclist.  I also trained with free weights and at one time or another every weight machine and piece of cardio equipment in a well stocked gym.  I played recreational softball, basketball, racquetball and golf.

After retiring from the military and seeing my 50th birthday faded into the rear view mirror I slowed down my training and my strength, conditioning and weight suffered.  I continued to commute to work on my bicycle but that was the extent of my physical fitness activities.  I knew I needed to get back in the gym but seemed to always find a reason to start tomorrow.

Through my son and daughter-in-law I was introduced to Fire-Bellz and kettle bell training.  I had not trained in a group setting in many years and it had never been my method of choice for training.  After learning the basic movements I signed up for the Fire-Bellz Body Transformation Contest (BTC) and began my journey to better health.

I started training regularly in Fire-Bellz classes and made the adjustments I needed in my eating habits. By the end of the contest I lost over 30 pounds and started feeling better.  I signed up for another contest and lost over 60 total pounds.  I felt great and my cycling commute speeds increased by 4 to 5 mph.  I continued to train at Fire-Bellz and saw others have the same amazing improvements I experienced.

I have come to really enjoy the group classes.  Having friends around you encouraging, supporting and challenging you takes the training to the next level.  With all the weight and cardio equipment I’ve used though the years I would have never thought something so basic could provide the cardio, strength and movement benefits the a properly used kettle bell can.

In 2012 I started helping with some of the administrative stuff getting new clients signed in before SPARK classes.  SPARK classes are Fire-Bellz introductory classes to kettle bell training.  After watching the Fire-Bellz staff working with people of all fitness levels as they started their fitness journeys I realized I wanted to be a small part of that same journey.

I was selected for the Fire-Bellz instructor intern program and also completed a Fire-Bellz HKC prep course.  In September 2012 I earned my HKC certification and began assisting others make life changing improvements though the outstanding programs at Fire-Bellz.  Although the HKC was a good beginning I took the next step in May 2013 and earned my Strong First level 1 instructor certification.