Kettlebells are used in the Skogg Kettlebell technique of training for conditioning and strength. The technique incorporates bodyweight workouts as well as a number of training tools in addition to kettlebells.

He published his Skogg Kettlebell System in 2010, a collection of five DVDs that explains his at-home exercise program. Those who have never handled a kettlebell before will learn good form and technique with this system. Skogg contends that the kettlebell is the ideal instrument for everyone interested in enhancing their fitness when used at the right weight and in the right manner.

In order to create kettlebell techniques that were simpler for people of various ages, sizes, and levels of experience, he collaborated with Black Iron Strength kettlebells. Fortunately, anyone may join the Skogg gym from anywhere with the help of the DVD package.

Michael is a well-known kettlebell trainer, author, and educator. He is a pioneer in the fitness sector and an inspiration to everyone who has worked with him and learned from him. Everyone from top athletes to fitness enthusiasts to people just starting out in exercise has received his instruction.

He stands out in kettlebell training due to his extensive experience using kettlebells, knowledge of the human body, and innovative exercises he has developed. While serving in the US military and stationed in Scotland more than twenty years ago, Michael was exposed to kettlebells by a Highland Games contestant. He was dissatisfied with his exercise regimen because it frequently left him hurt and sore. 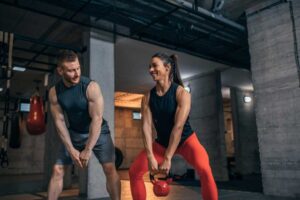 Micheal Skogg and relation with kettlebells:

He saw the excellence of the total-body exercise right away, and he has since improved and developed his own kettlebell exercises to create the SKOGG Method. Michael has a distinct method for building up and training the body because he is schooled in sports injury rehabilitation and remedial exercise. In order to maximize the potential of every body component, Michael stresses turning weaknesses into strengths when training with kettlebells. Even those who had injuries that doctors said would never have fully healed have seen changes in their bodies thanks to him.

For a beginner kettlebell workout, the Skogg Kettlebell System DVDs are excellent. The first DVD includes a 32-minute lesson on how to hold a kettlebell correctly before showing viewers how to do the exercises with perfect form and technique.

The final four DVDs cover each of the four levels of experience: novice, intermediate, expert, and warrior. The exercise movements remain the same but the duration of each exercise lengthens as the levels rise. Depending on the fitness level, each workout lasts 35 to 40 minutes. After completing the 12-week training, users restart the DVDs with a heavier kettlebell and repeat the workout.

Who was the kettlebell’s inventor?

In ancient Russia, where physical prowess was valued, kettlebells first appeared. A 1704 Russian dictionary has the earliest known use of the word “girya,” which refers to a classic cast-iron Russian weight.

What makes it a kettlebell?

Since it resembles a cannonball with a handle or a teapot without a spout, the English word “kettlebell” was used to describe it.

Why do they have the name “Turkish get-ups”?

By the way, the reason it’s dubbed the Turkish get-up is that Turkish wrestlers allegedly employed it to show off their incredible power to one another.

Do kettlebells serve no purpose?

Kettlebells offer minimal advantages over dumbbells and are a poor tool for building strength in non-beginners.

What causes the weight of kettlebells?

Because it takes more effort for the forearms to retain grasp on a smaller handle such as the competition bell handle, it seems heavier.