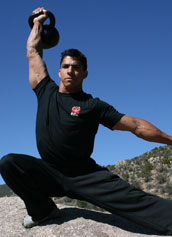 Zar Horton is a long-time veteran of the Albuquerque Fire Department. With 18 years of service. He served as a Captain of Special Operations for the last 3 years at the Fire Academy, where his other duties included assisting in the design and implementation of the Fire Cadet PT (physical training) program.  He has recently been promoted to the rank of Commander and will soon become a Battalion Commander after he assists in the upcoming Fire Cadet physical fitness program beginning in July 2007.

Zar met Pavel in 2000 and took several classes from him. After 3 years of integrating Pavel’s strength and flexibility principles into his own and his client’s programs, he was inspired by Tige to begin training with the Russian Kettlebell. After phasing it into his established training it soon became his stand-alone program.

Since then Zar has trained many firefighters, police officers, and civilians. He has served for Pavel at the Instructor certification course as an assistant instructor in 2005 and has recently been named as an RKC Team Leader where he will serve as a Lead Instructor at an upcoming 2008 RKC Instructor course.

He and Tige formed FIREBELLZ Their idea was to take the training they had been giving to their fellow firefighters and extend it to others who might be interested. They have since trained many civilians, Albuquerque Police Officers, and Henderson, Nevada firefighters. They are excited to bring the FIREBELLZ studio from a personal training studio to a facility available to the public.